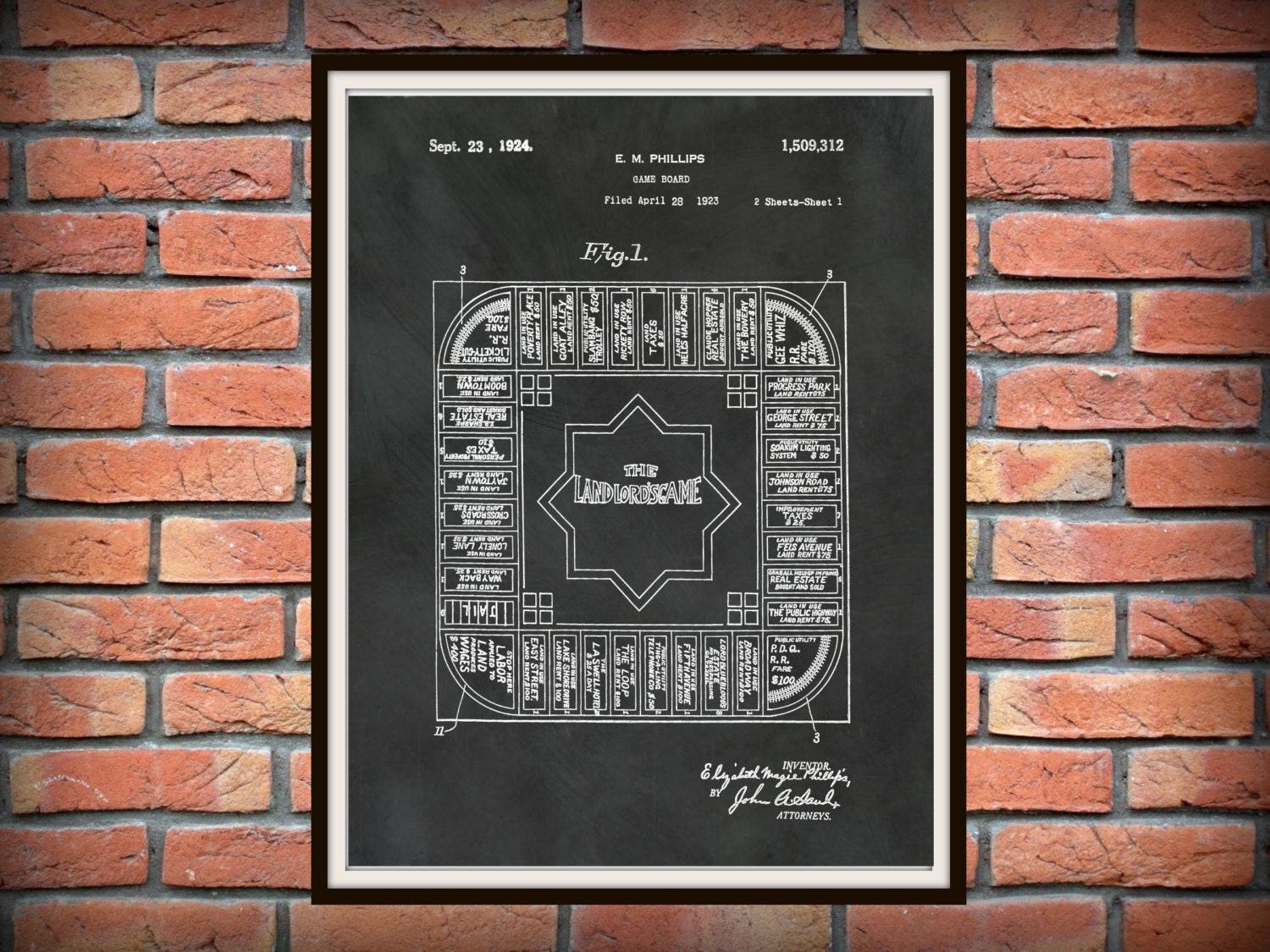 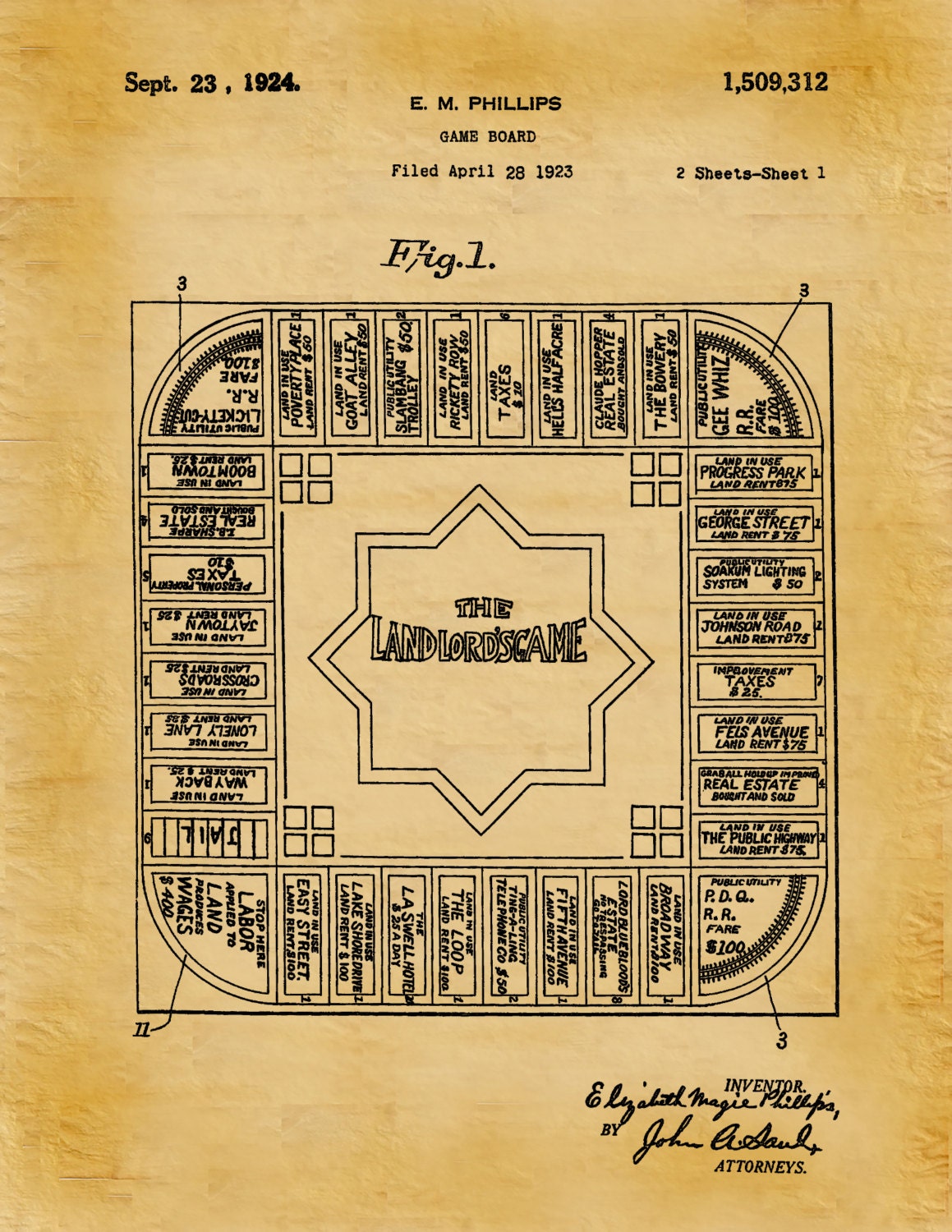 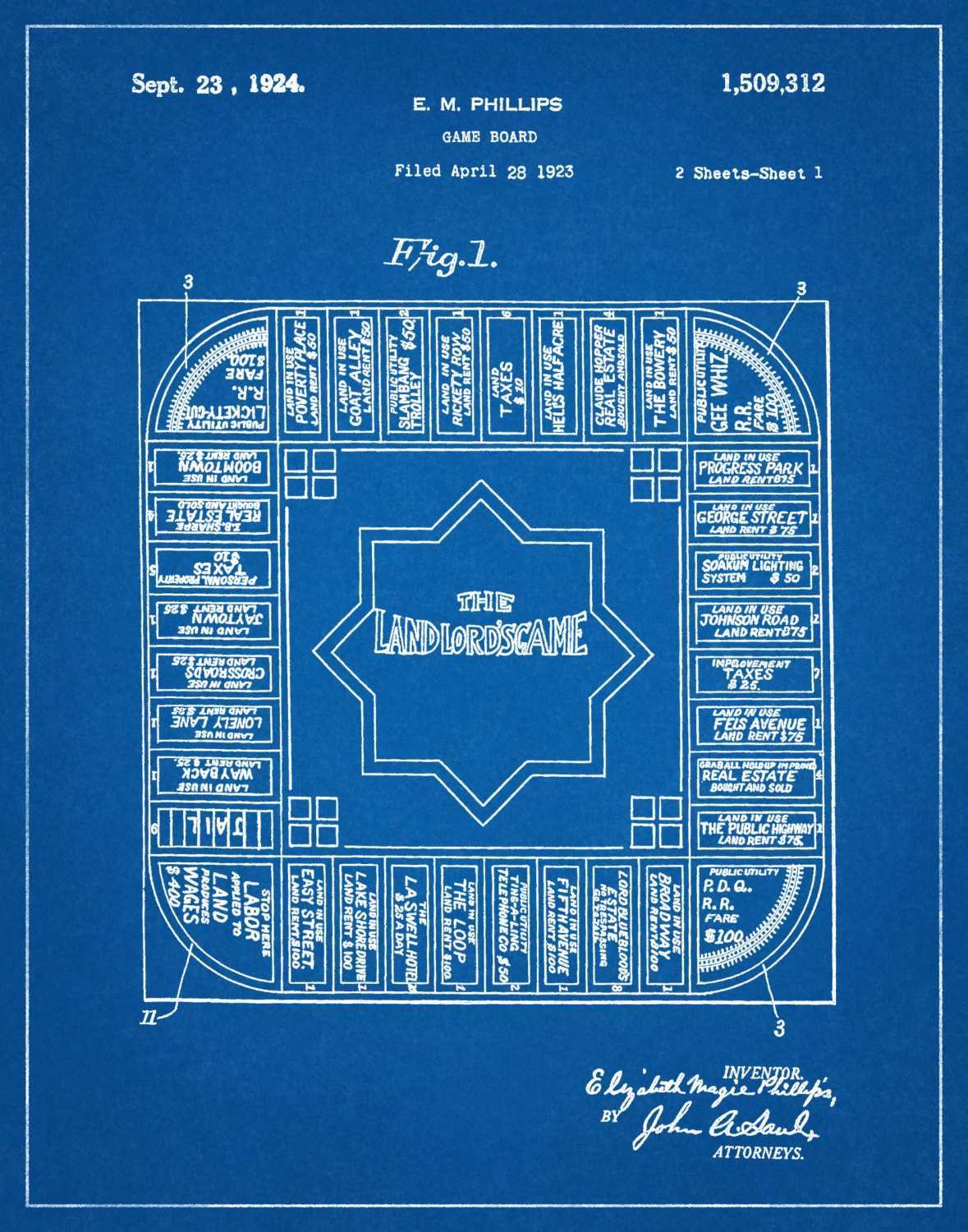 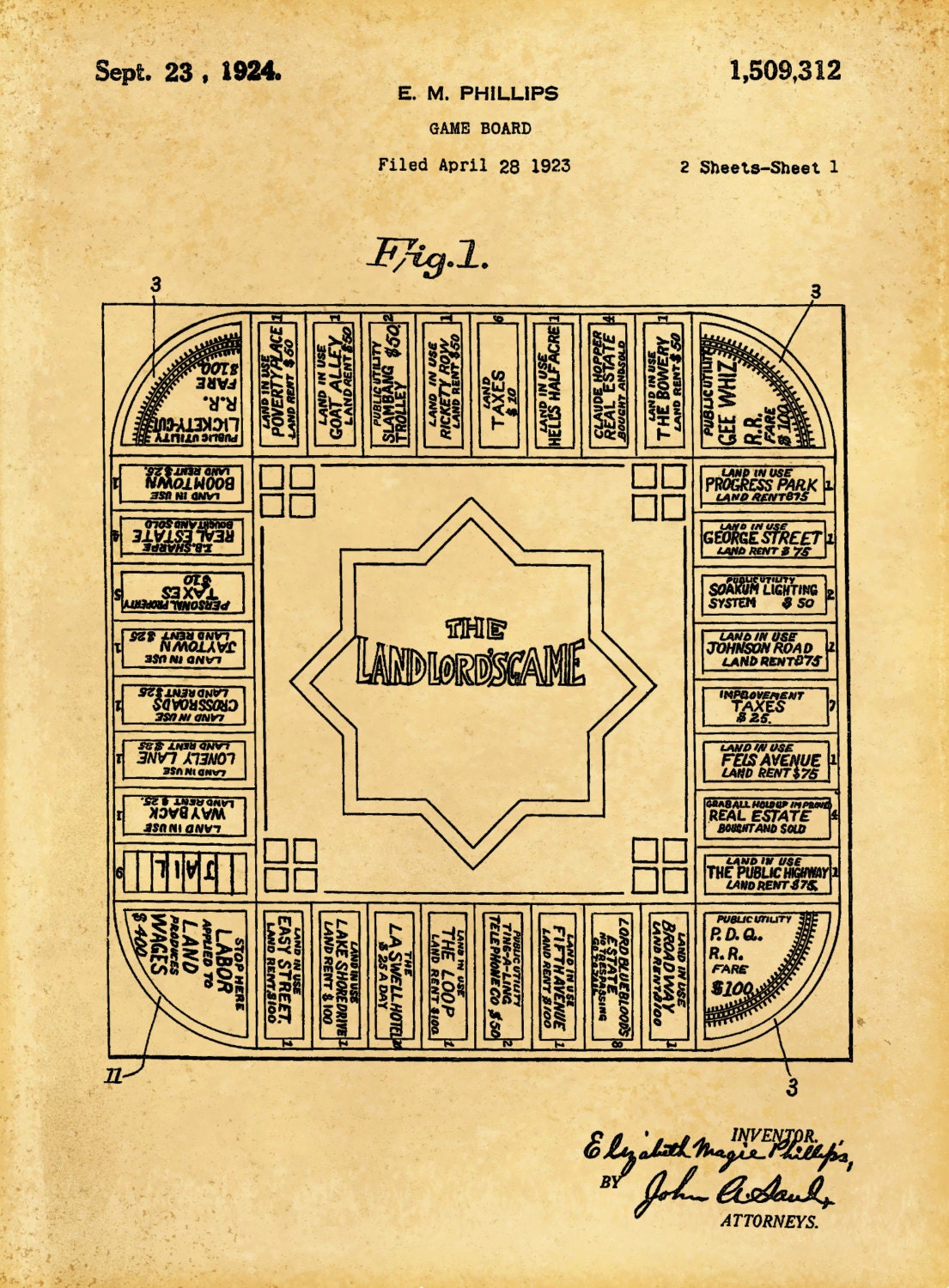 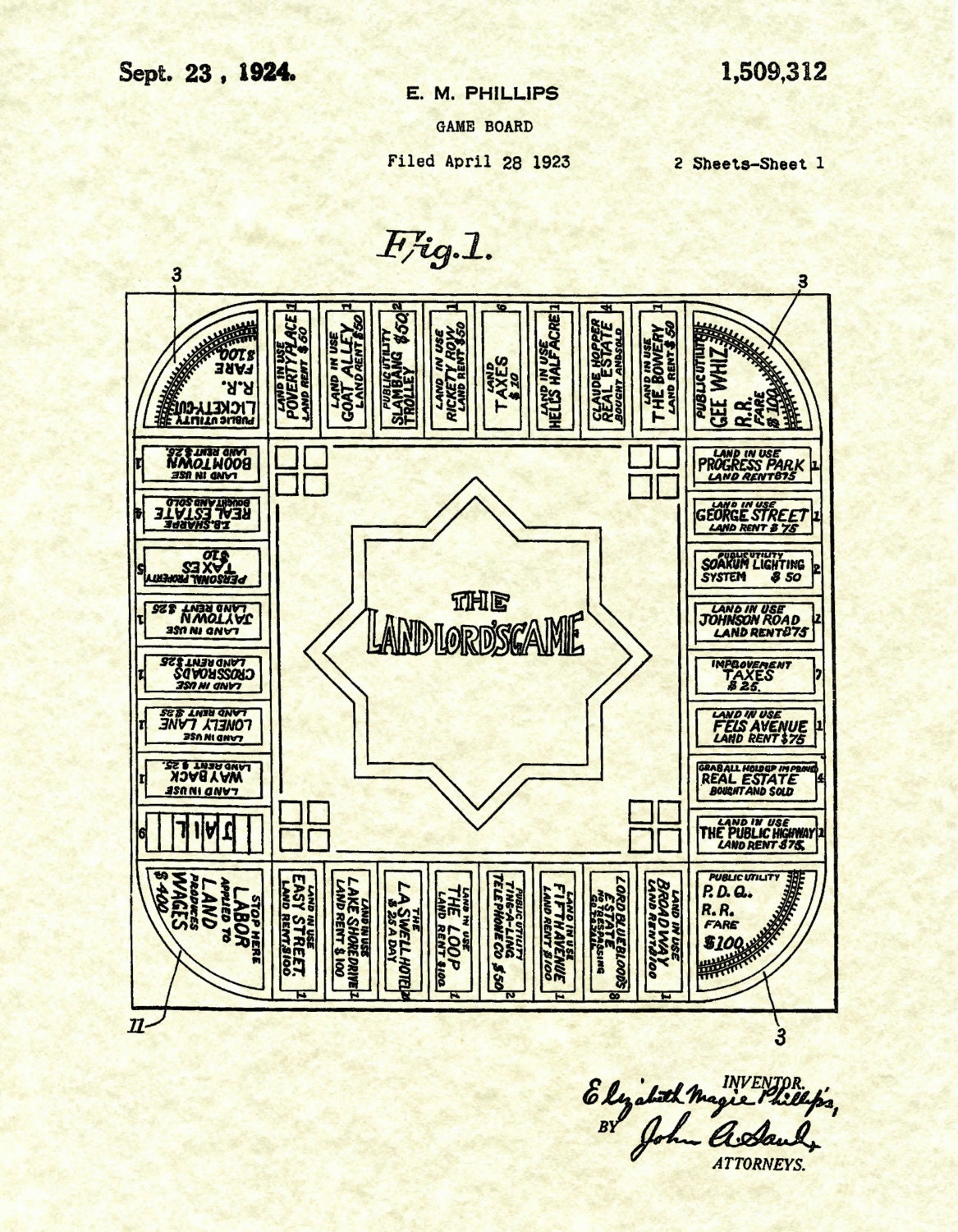 1924 LandLords Game, Predecessor to Monopoly, Patent designed by Elizabeth Magie Phillips of Washington, DC. The Patent was issued by the United States Patent Office on September 23, 1924.

History of Monopoly or Land Lord's Game:
The history of the board game Monopoly can be traced back to the early 20th century. The earliest known version of Monopoly, known as The Landlord's Game, was designed by an
American, Elizabeth Magie, and first patented in 1904 but existed as early as 1902. Magie, a follower of Henry George, originally intended The Landlord's Game to illustrate the economic
consequences of Ricardo's Law of Economic rent and the Georgist concept of a single tax on land value. A series of board games were developed from 1906 through the 1930's that
involved the buying and selling of land and the development of that land. By 1933, a board game had been created much like the version of Monopoly sold by Parker Brothers and its related
companies through the rest of the 20th century, and into the 21st. Several people, mostly in the Midwestern United States and near the East Coast, contributed to the game's design and evolution.

All patent print pages are restored and digitally enhanced to remove as many flaws as possible while maintaining the integrity of the original document.

Patent prints are a wonderful way to own a piece of history and display your favorite inventions on your home or office walls.

Select size and color from the drop down menus. Feel free to contact me for a different size or color background or texture. I will do my best to accommodate your request and create a custom order for you.

Note: Many computer monitors vary in color calibration therefore your print may have a slight difference from what your see on your screen.

absolutely LOVED the item!! it was exactly as described, shipped on time, & arrived earlier than expected ....thank you so much!!