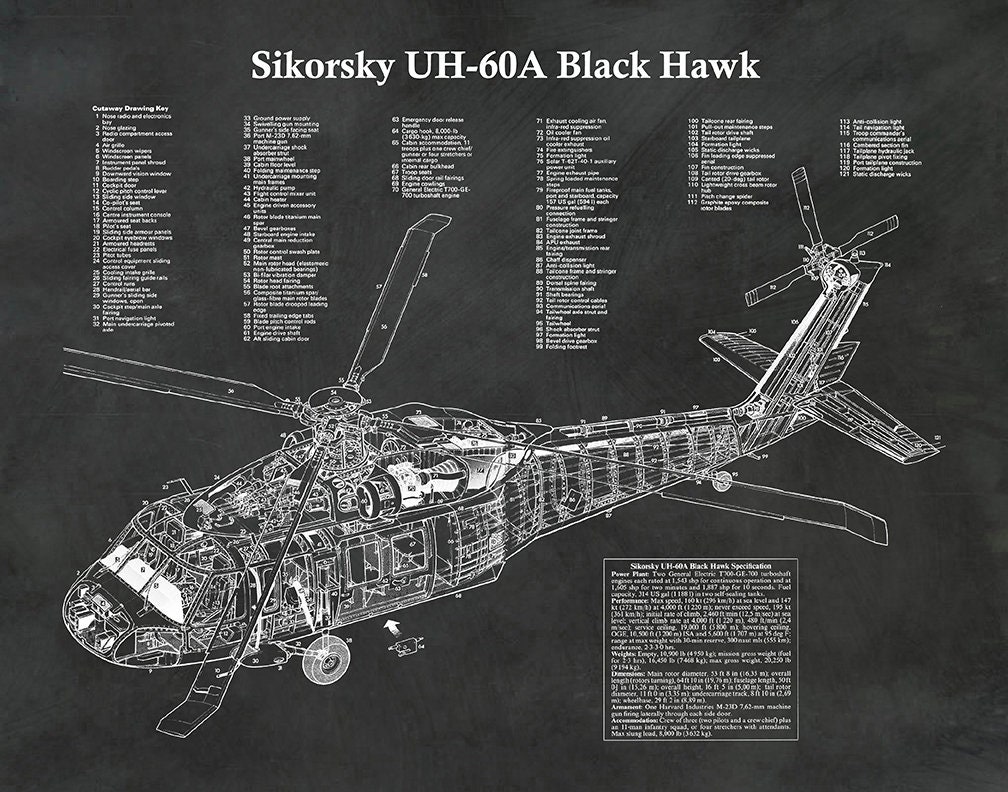 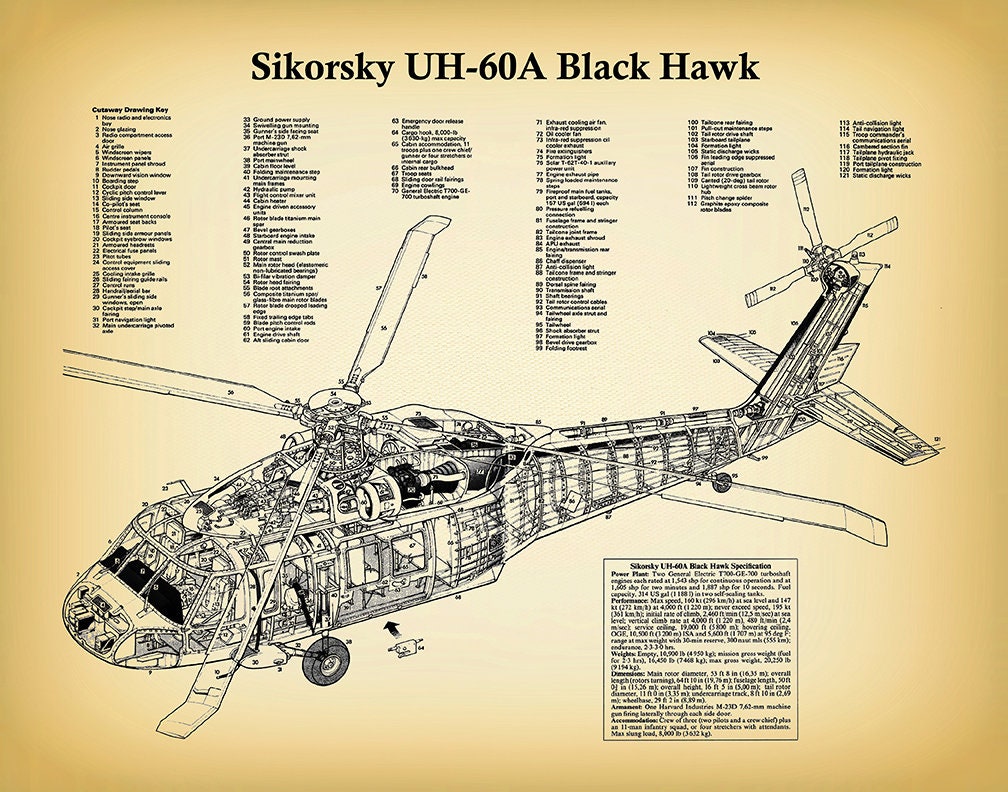 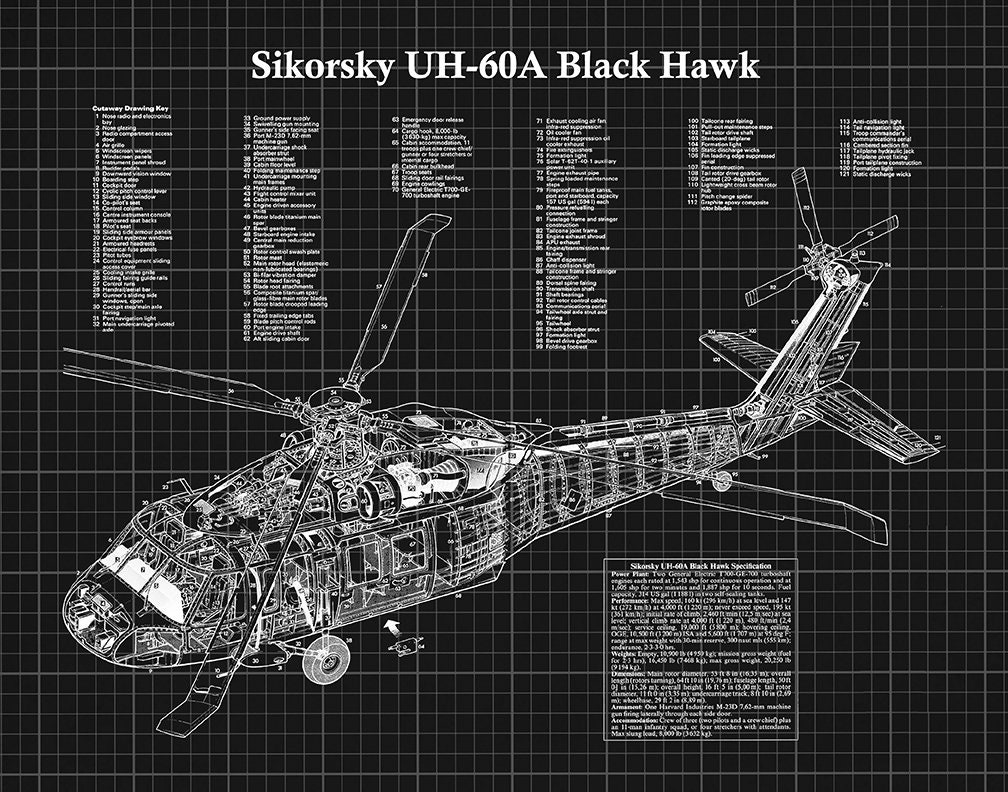 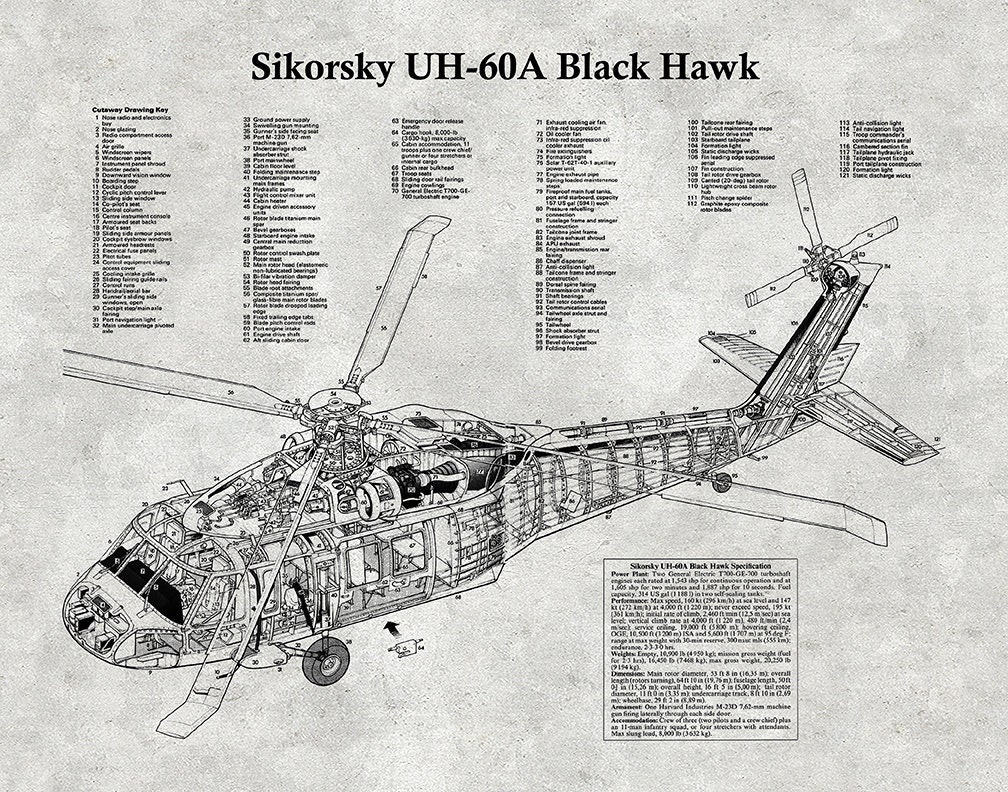 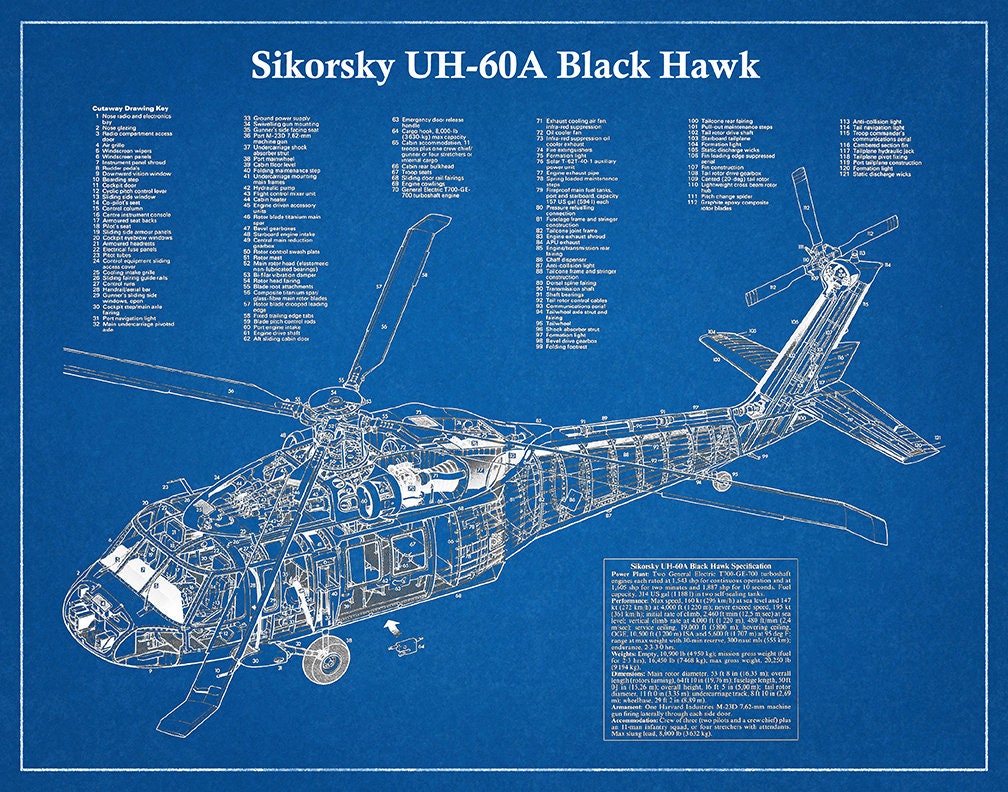 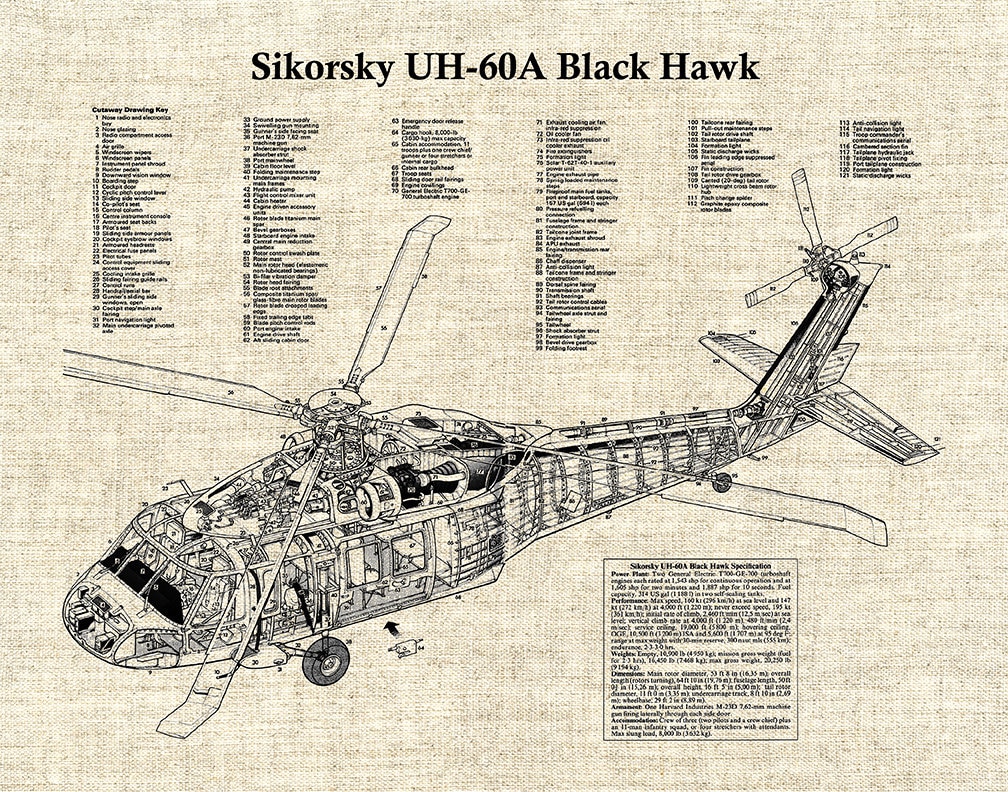 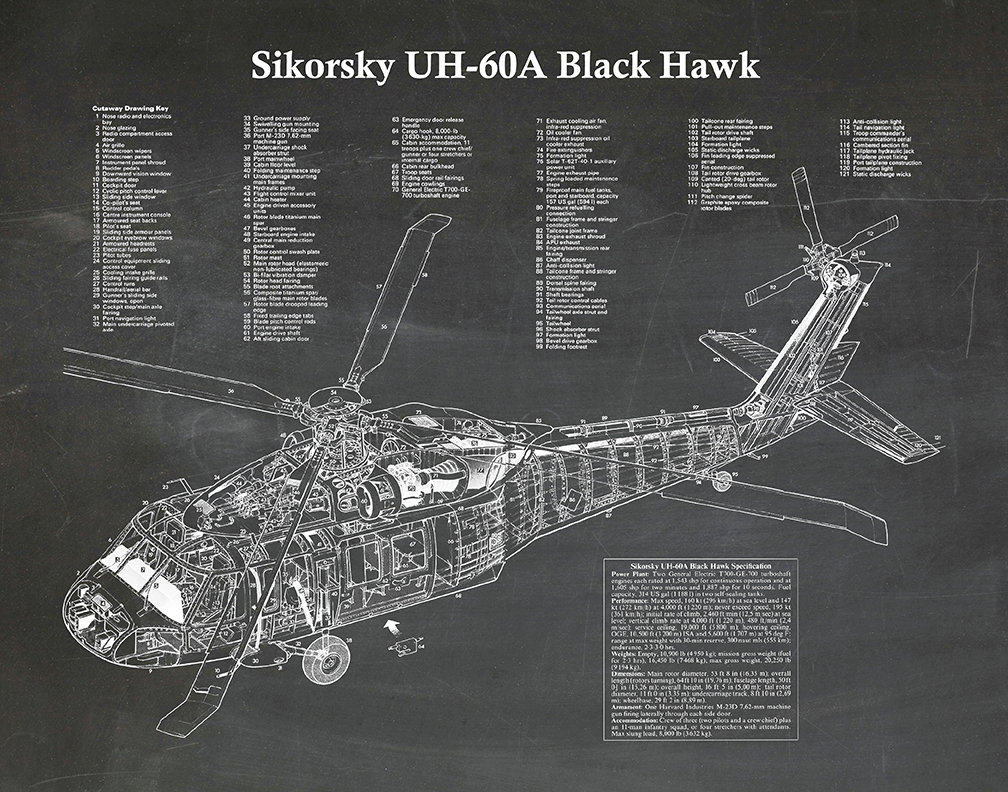 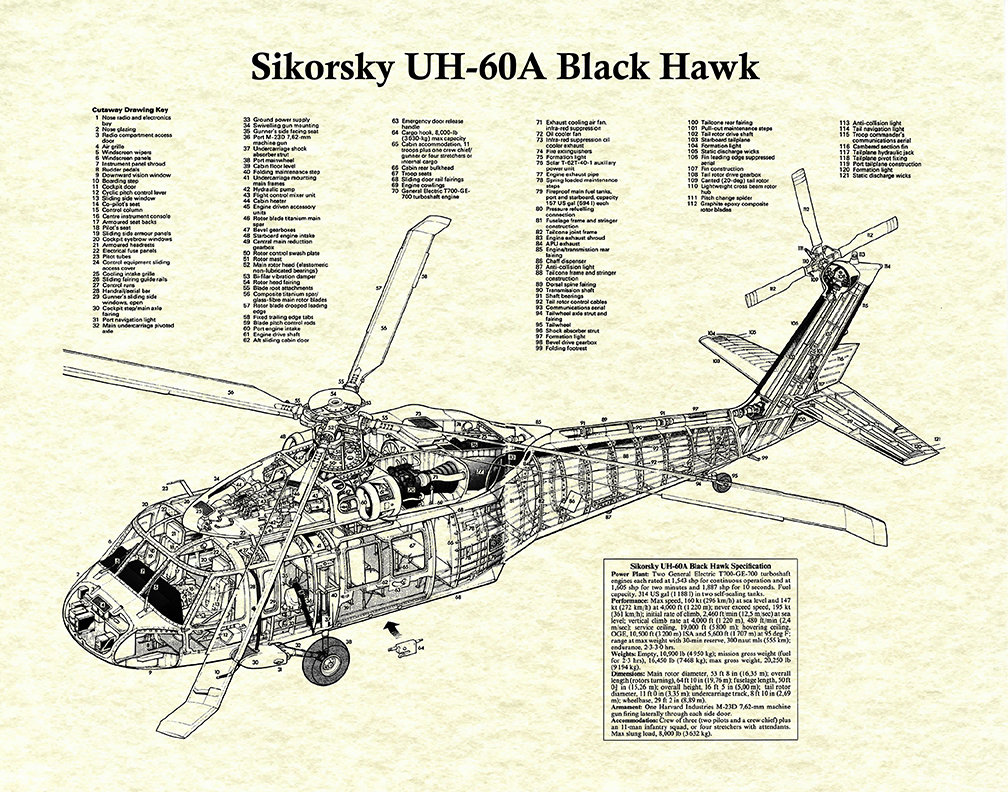 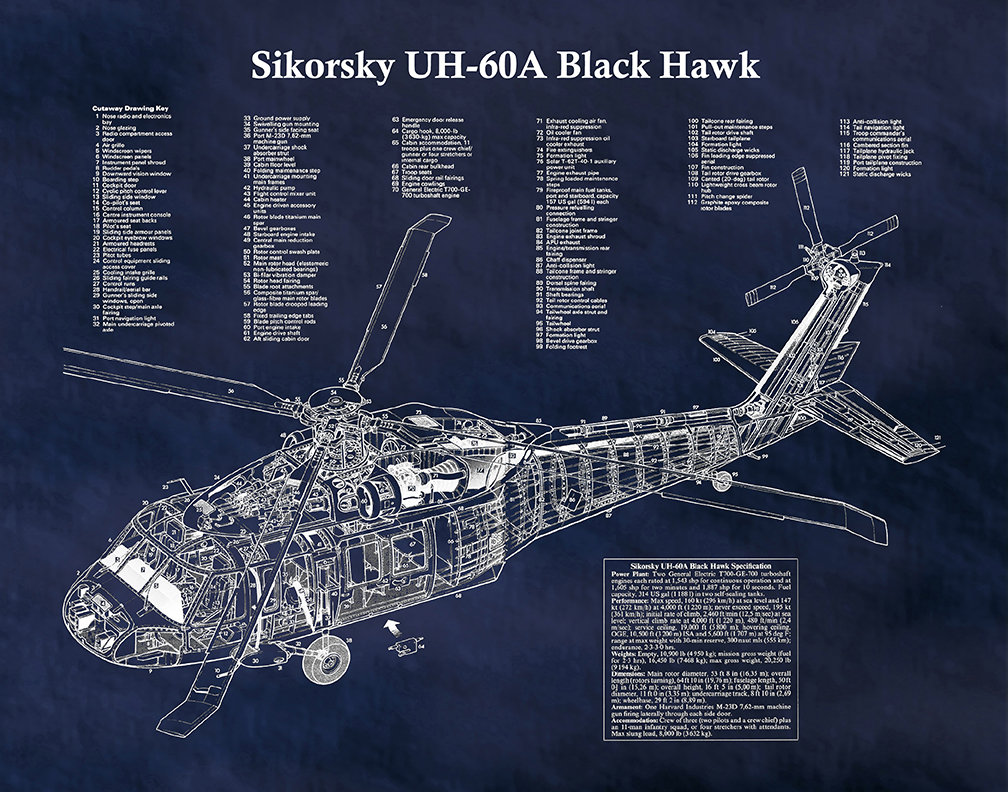 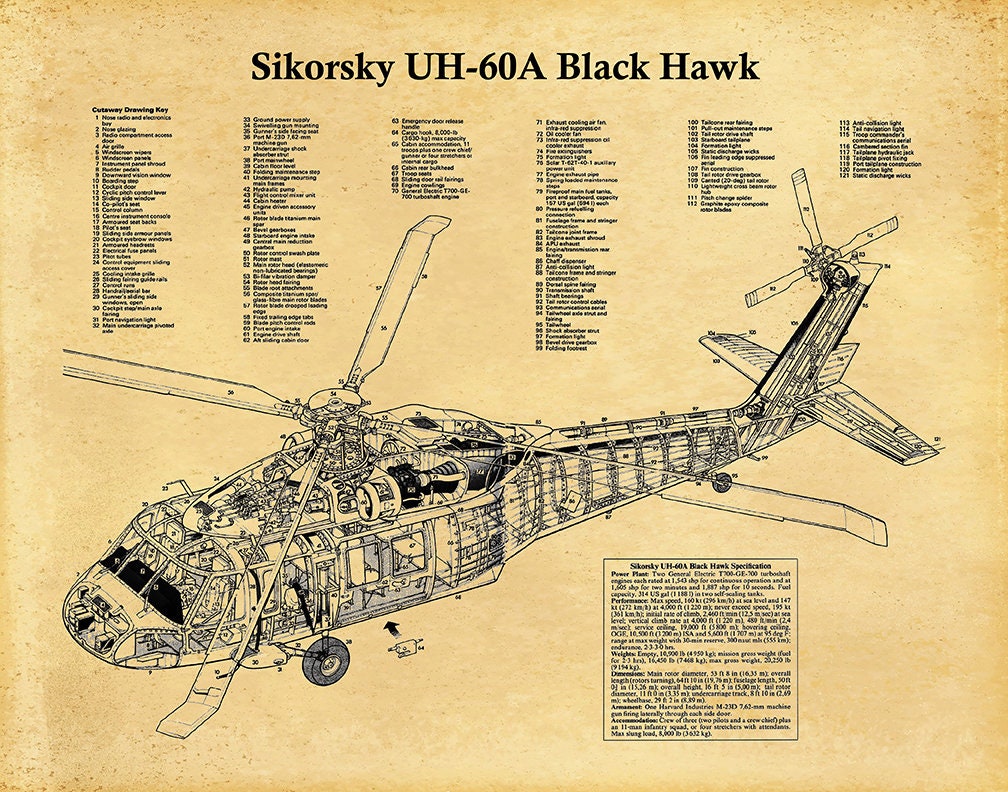 The Sikorsky UH-60A Black Hawk is a four-bladed, twin-engine, medium-lift utility helicopter manufactured by Sikorsky Aircraft. Sikorsky submitted the S-70 design for the United States Army's Utility Tactical Transport Aircraft System (UTTAS) competition in 1972. The Army designated the prototype as the YUH-60A and selected the Black Hawk as the winner of the program in 1976, after a fly-off competition with the Boeing Vertol YUH-61. Named after the Native American war leader, Black Hawk the UH-60A entered service with the U.S. Army in 1979, to replace the Bell UH-1 Iroquois as the Army's tactical transport helicopter. This was followed by the fielding of electronic warfare and special operations variants of the Black Hawk. Improved UH-60L and UH-60M utility variants have also been developed. Modified versions have also been developed for the U.S. Navy, Air Force, and Coast Guard.

All patent print and illustration pages are meticulously restored and digitally refined to remove as many flaws as possible while maintaining the integrity of the original document.

These fine art prints are a wonderful way to own a piece of history featuring your favorite inventions or hobbies to be proudly displayed in your home, office, business, man cave or camp.

All prints and illustrations are printed by a process called Giclée (a French word for "spray'). The inks used in this process have a much higher resistance to fading than normal printing inks. I only use premium quality, acid free archival heavyweight matte or luster paper using Epson Ultrachrome K3 Pigment ink that will last over 100 years.

All images shown are purposefully lower quality for faster upload speed and to prevent others from duplicating my work. The print you receive will be printed in high resolution.

Colors on your monitor may differ slightly from actual product.

All orders ship in a clear, acid free protective sleeve that is inserted into a rigid envelope or tube to ensure safe delivery to your home or office.

© Blue Moon Patent Prints, all rights reserved. By purchasing this artwork, you do not acquire its copyrights and any form of duplication or distribution is strictly prohibited.

Bought this as a gift for my son as an Army graduation gift. Super fast processing time. Perfect incentive because I am on a tight timeframe. Shipped the day after I paid for it. The paper itself is thick and sturdy. The printing doesn't look like just printer ink. It actually feels like its a matte finish almost like chalkboardish. For this particular print, I'd say best to order larger. The wording is a little hard to read. But maybe not for my son, idk. I ordered the 11x14 because he will be moving a lot and I didn't want to go too big. However, I do like how the helicopter pops. I'm excited to give it to him. I'm overall very happy with this item and highly recommend. Just feel like the more detailed the print, go bigger :) also, I wish etsy would allow more than one photo so I could show the paper detail.